This project started earlier this year with the goal of making Python more accessible to non-native speakers of English.  A personal goal of mine was to get a current survey of what is available in the way of Python information in languages other than English. 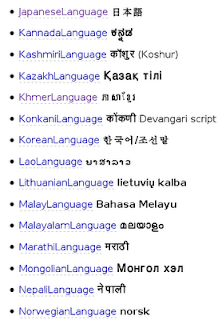 The project is by no means original.  On the Python Wiki there were at least two other pages upon which this one was built:  PythonAroundTheWorld and CategoryLanguages.  The latter, to my recollection was the work of Andrew Kuchling and many others.  That base survey of knowledge to build upon made this project easy and fun.

Christmas Day I received an autogenerated e-mail notifying me of changes to the ArabicLanguage page.  Anass Ahmed had built upon the work of Ahmed Youssef (author of Prayertime) and placed a Wikipedia-like general info on Python section into the page.  What didn't exist five months ago is now on par with the Thai and Russian pages, both of which are pretty robust.

Update:  Ahmed Y. got with me and let me know there were some problems with the Arabic page and the Wikipedia-like entry.  @siah on twitter had previously tweeted that some of the direct translations (Python = Pybon) were a bit comical.  Well, all I can say is it's nice having some Arabic speakers covering your back. 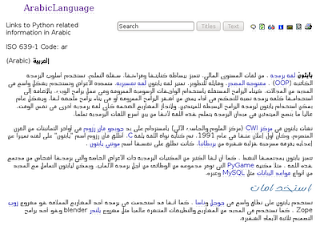 I personally am intrigued by the possibilities that Python3 offers for unicode identifiers.  The coolest thing I've found on this end of things is a couple of PDF links on the Khmer (Cambodian) page.  Python 3.0 had hardly come out when an author or authors put together two quality pdf docs almost entirely in Khmer.  Python keywords and imported library names are the only English in the docs. 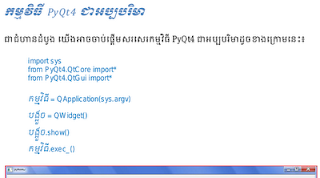 There are a few more nuggets in the language pages.  The definition of nugget will vary according to your interests, your skill level, and your programming tastes.  Please feel free to add to the pages; they are by no means complete.

Thanks to Rami Chowdhury, vid svashka, Kirby Urner, and a host of others for their encouragement, advice, and ideas on this project.  Special thanks to the many bilingual pythonistas and friends of the Python community who contributed code snippets, texts, and links.
Posted by Carl Trachte at 10:23 AM 5 comments:

unicodedata first apeared in Python 2.5.  Some names currently associated with checkins to Python's svn source tree are von Löwis, Lemburg, Forgeot d'Arc, Ruohonen, Lundh.  I probably won't get a chance to meet you folks, so I'll take this quick opportunity to say "Thanks".  unicodeata is a lot of fun and brings everything you need from Unicode into the Python interpreter.

There is plenty of information about Unicode out at unicode.org.  Putting it together with a module and a script is essentially what unicodedata's authors have done.  For those interested, the makeunicodedata.py(http://svn.python.org/view/python/trunk/Tools/unicode/makeunicodedata.py?view=markup) script written by F. Lundh gives a high level overview of how some parts of the module are generated.


Rather than just rehash the unicodedata documentation, I'd like to give an example of each method or member of the module and craft a few handy tricks toward the end of this blog entry.

class PyCapsule(object)
|  Capsule objects let you wrap a C "void *" pointer in a Python
|  object.  They're a way of passing data through the Python interpreter
|  without creating your own custom type.
|
|  Capsules are used for communication between extension modules.
|  They provide a way for an extension module to export a C interface
|  to other extension modules, so that extension modules can use the
|  Python import mechanism to link to one another.
|
|  Methods defined here:
|
|  __repr__(...)
|      x.__repr__() <==> repr(x) 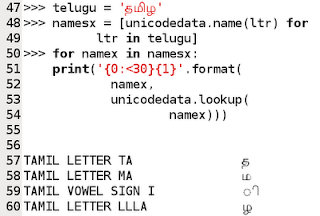 normalize and decomposition are two methods I've covered extensively (or at least verbosely) in two previous posts here and here.  We're going to skip them. 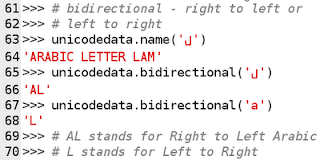 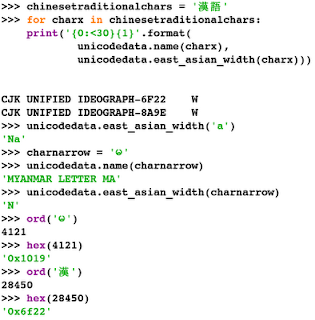 East Asian Width is covered in UAX #11.  In short, the width of the character usually corresponds to the space it takes up in memory or in disk.  After that, it gets more complicated.  The 'a' in the screenshot is an ASCII character, and like the rest of ASCII, falls under East Asian Narrow (Na).  The Burmese character, on the other hand, does not fall under the East Asian Character Set, and takes on the designation Neutral (N).

Hey!  Wait a second - Myanmar is a lot closer to East Asia than Europe and the Americas.  Folks, just trust me and Unicode on this one.  I'm not an expert; nonetheless, that's the spec.  It's an example of why it's good not to assume too much about Unicode without reading the UAX's and the code charts first.  Let's move on.


I have previously written blog post that covers combining codes a bit.  We'll still look a little bit at them along with category codes. 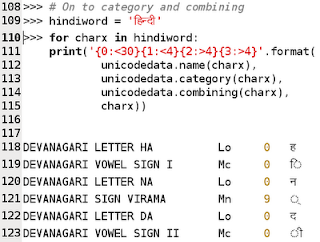 Lo is a lowercase letter.  Since Devangari doesn't have case, all the letters that can stand on their own are classified this way.  Mc is combining-spacing - the character cannot stand alone, but when combined with another character it adds some width to the group of characters - the carriage moves to the left for those of us who learned to touch type on a typewriter back in the Jurassic.

A category of Mn is for combining non-spacing.  In this case the virama is below the main character and does not move the cursor forward.

The combining code is typically zero.  The virama is such a common character in almost all of the languages of India that it gets its own special code of nine.  Actually, there are a number of Unicode characters for the virama - one for each language or character set: 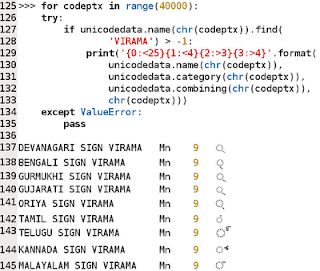 All that is left are the numeric categories numeric, digit, and decimal.

Wow, I couldn't have picked a more boring example.  Still, the fact that numeric yields a float is significant.  Let's see if Unicode has any interesting characters: 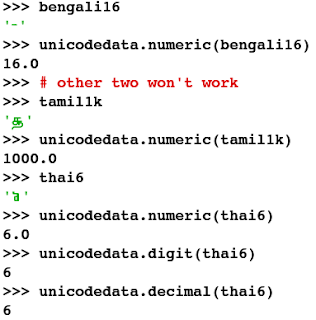 OK, that's a lot to cover.  One fun thing you can do is look up a character set or language just based upon the inclusion of the word (TELUGU, for instance) for the language in the character description.  It's not the same as a code chart, but it can be handy: 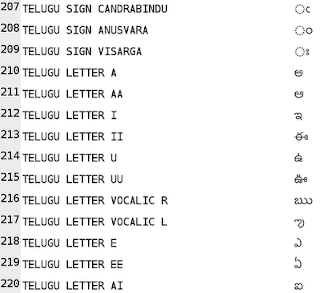 Well, that's what I think I know for now.  Stay tuned.

Posted by Carl Trachte at 10:30 PM No comments:

We'll need to insert a couple screenshots to make sure the Malayalam characters I'm using show up.

1) I had to use the letter RA to start the identifier; the vowel sign is a combination character and cannot be used to start an identifier.

2) Armed with a little knowledge of Unicode, I find the unicodedata module quite handy.  I owe a lengthly post to this module and its author, but I don't quite have a handle on its full scope yet.
Posted by Carl Trachte at 5:24 PM No comments:

A couple days ago I posted some code that dealt with reading bytes from a file and manually interpreting them (as opposed to using the Python3.x bytes type's decode() method).

It occurred to me afterwards that I really should have written some kind of test for the code, even if it was a fairly crude snippet.  I've heard everything from "Not testing is evil" within the Python community to "Look, that's developer stuff; you're not a developer; you're a geologist . . .", etc. in the workplace.  My personal thought is that if I'm writing code, I should be testing it no matter what anyone says.

The code below is my attempt to test what I wrote the other day - it did reveal a couple errors and omissions, so it ended up being a good use of time.  I've probably abused unittest's setUp() method a bit (making sure I was at the start of my test file).  Otherwise, I hope it's an acceptable start.

And to the command line:

Update 7DEC09:  I took the advice of one of the commentors and clarified the setUp method use.  In addition I added a tearDown method and made separate tests for each initial UTF-8 byte.

Because a file is being read sequentially, it seemed safest to have two separate classes for the tests that read the file.

The new run yields this output:

A while back I did two posts, one on Lao UTF-8 and one on Arabic UTF-8, using binary representation of bytes to demonstrate UTF-8 encoding in Python.
I still wasn't satisfied with my knowledge of Python 3.x and string handling, nor was the whole UTF-8 thing second nature to me.

On Monday, I'm giving a talk to our local Linux group about the subject of my Python poster session, Python 3.1, Unicode, and Languages of the Indian Ocean Region.  In the immortal words of Dean Wormer, "Fat, drunk and stupid is no way to go through life, son."  You know, it's no way to give a presentation, either.  Time to get smarter now.

The code in this post is nothing but a verbose rehash of what the Python string object does already - decode.  But understanding exactly what is going on is helpful.  That's the beauty of having an interpreter in Python or LISP - you can check your assumptions and find out your mistakes as fast as you can type (it would help if I could type faster).

Basic things I learned in this exercise:

1) empty, one item, or many items, Python's bytes object is a sequence that must be iterated over or indexed to get byte values.

3) binary math goes way beyond decimal 255.  Being able to read hexadecimal numbers and recognize significant ones is a real help when working with UTF-8 and Unicode.

Enough qualifiying and waffling.  To the code and the interpreter!


I'll work a little with this file of some foreign language strings in the screenshot below: 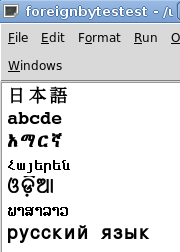 That's a lot of activity just to understand a few simple concepts.  It helps me.  Hopefully someone else can benefit from it too.

1) I like the collections.SortedDict object; it saves me having to work with a sorting key and an associated list.  I believe Ronacher and Hettinger were responsible for getting it into the standard lib.  Thanks, here's to people with German names from outside of Germany (Austria and America respectively).

2) The only characters I'm familiar with that have a four byte representation in UTF-8 are musical notes.  They don't show up in idle, so I left that part of the testing of this go.  Everything here is three bytes or less.
Posted by Carl Trachte at 11:53 AM No comments: